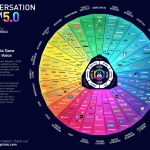 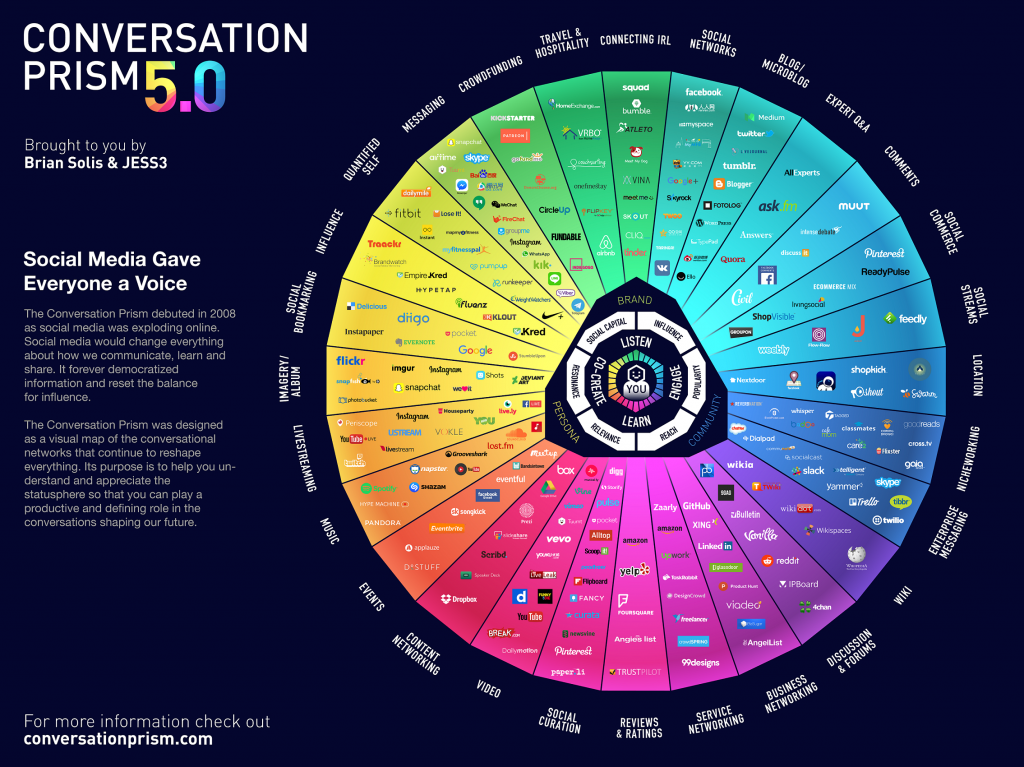 The Conversation Prism is a visual map of the social media landscape.
This information is licensed under a Creative Commons Attribution-ShareAlike 4.0 International License

Why does your tweet matter to healthcare?
Everything on the web accumulates data even on social media platforms like Twitter. Twitter is categorised as an online microblogging system within the web 2.0 ecosystem that enables users to send and read short 280-character posts called “tweets” as demonstrated in the Conversation Prism which is a visual map of the web 2.0 landscape created by Brian Solis, a digital analyst, anthropologist and futurist who studies the effects of disruptive technology on business and society.

Twitter is the world’s largest open microblogging platform making it an effective tool for healthcare stakeholders to interact, communicate and educate others in real-time (health 2.0). Although social media isn’t perceived as a clinical communication tool for obvious reasons including those pertaining to patient privacy it does provide an indispensable opportunity to reach a massive audience, both locally and globally.

Platforms like Twitter also generate a significant amount of big data which can help us to identify patterns of public behaviour and sentiment sometimes useful towards design research for health system development and other areas like disease surveillance. However, in contrast to the consumer sector, big data generated online for healthcare will be much more sensitive to noise. It’s important then to consider using agile tactics such as the standardisation of hashtags so that we structure it better and generate more meaningful data.

Below are three criteria to consider before composing a tweet for healthcare:

1. Speak to your audience
One reason that social media sites like Twitter are being utilised for healthcare is to disseminate education both to the public and professionals. The educational material you share can take the form of a video, blog, article, photo, illustrations or a simple line of text. When posting a tweet to your followers make sure that you leverage the opportunity to encourage your audience to engage by using those characters strategically. In other words, share your thoughts about the material you are tweeting about rather than leaving your characters blank or only disseminating it with a bunch of hashtags. Entice your audience to read further.
.
2. Know your healthcare hashtags
Symplur is the only analytics platform with a free index of global healthcare hashtags. According to Wikipedia, a hashtag is a kind of metadata represented by the pound or sharp symbol (#) in front of a keyword on the web. This form of tagging is used on microblogging and social networking services such as Twitter, Facebook, Google+, Linkedin and Instagram, but it is also being used on various search engines like Google. When hashtags are used in Tweets they connect posts into a single global thread. Health hashtags are used for various topics including diseases (e.g. #Diabetes), Twitter chats and journal clubs like #hcldr, geographic communities like #hcsmEU or #hcsmSA as well as for medical conferences like #PHASA2018. If there is no uniformity in the use of hashtags it makes it difficult for the public to search and follow, as well as for researchers and other authorities like data scientists to analyse for system improvement. The number of hashtags you use in a tweet should also be limited so that the public has a clear indication of which conversation to follow.
.
3. Practice good digital citizenship
Using the web for health care can be effective towards debunking medical myths and empowering the public with real-time information. This is extremely powerful when a collective of citizens are disseminating reputable information to educate each other rapidly, especially during a time of crisis like an outbreak or to promote behaviour change and awareness around a disease. It is important to remember that once you send out anything on the web including a post or tweet you create a digital footprint which cannot be erased. Always practice good digital citizenship principles especially in the medical realm. Remember that any information you share to the public about medicine can spread across the globe within seconds. Think carefully about the impact you may have on a patient who uses that information resulting in dire consequences because they trusted your post. Take the time to read that article before you post it widely, don’t only rely on its headline. Question who created that YouTube channel by investigating the account owner, make sure that tweet you reshare wasn’t created by a fake account before you reshare it with your followers. Whether you are a healthcare professional or another stakeholder, take the time to read the South African Medical Association (SAMA) guidelines of web 2.0 ethical practice before getting started. Always share with care when it comes to people’s health. 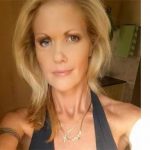 Article Author:
Vanessa Carter is an award-winning entrepreneur and was a creative director for 18 years. She is also a Stanford University Medicine X e-Patient Scholar for Antibiotic Resistance and Facial Difference Conditions. She is an advisor to various organisations including the South African Antibiotic Stewardship Program (SAASP) as well as co-chair of the Public Health Association of South Africa (PHASA) Health IT Special Interest Group. Read more here.

Vanessa Carter
DIGITAL HEALTH ACTIVIST IN SOUTH AFRICA Vanessa is a design thinker and entrepreneur with 20 years in advertising and 10 years of patient experience in the private and public health sector in South Africa due to a face reconstruction. She is an international ePatient speaker and a digital health activist. She is the founder of #hcsmSA (Health Care Social Media South Africa), which is a geographic community she hopes will connect all aspects of healthcare on one central database. Connecting health virtually can improve networking, genomics data, education, access to treatment, online participation, problem solving and innovation. Vanessa was a creative director for Artext, a branding company which she established in 1997. Artext were nominated in the top 25 entrepreneurs at the National Small Business Chamber of Commerce (NSBC) in 2013. Vanessa believes that small business shouldn't be underestimated in the growth of the economy and that an "underdog" driven by passion and vision can accomplish anything. She was awarded the Woman of Substance, Woman of the Year Award in 2015 for her commitment to female entrepreneurship, community work and digital health activism. - Member of the HelloHealthcare Network - Primary Healthcare Providers in South Africa - International Ambassador, Video Judge and Speaker for Doctors 2.0 & You, Paris (Associated to Stanford University - MedX) - Honorary Ambassador for Doctor Gratis - First African Digital Health Activist in #TheWalkingGallery of healthcare in Washington D.C. Her Jacket is called Reconcilliation and represents equality in healthcare through Participatory Medicine. - Awarded a Scholarship in 2015 from the Society for Participatory Medicine (S4PM) in recognition of her articles. - Member of the Society for Participatory Medicine - P4 Medicine - First South African ePatient to moderate a global health tweetchat
« Bridging the Medical Education gaps in South Africa with a Digital Platform
Can technology play a role towards improving Antibiotic Resistance in South Africa? » 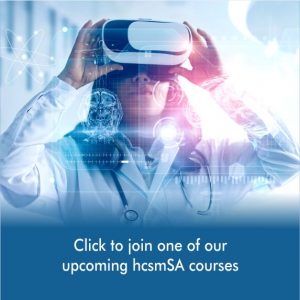 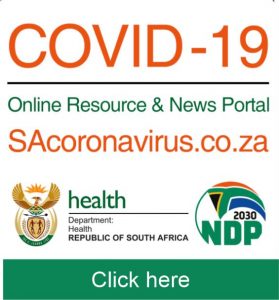